Official figures show a startling rise in accidents involving HGV’s colliding with cars, usually into a queue of stationary traffic, most notably the high profile incident which caused the deaths of a Mother and her three young children on the A34 near Newbury in August 2016. In this tragic case, the HGV driver who caused the multiple vehicle accident was found guilty of being distracted through changing the music on his mobile phone when the accident occurred.

Statistics published by Cheshire Police, in a twelve month period to September 2016, revealed that over 1600 individual mobile phone offences were recorded in the County alone, which was almost ten times the number of speeding offences recorded throughout the same period. These alarming statistics show just how big of a problem distracted driving through mobile phone use is, and this kind of distraction also includes a startling number of professional drivers facing prosecution through holding or using a handheld mobile phone whilst at the wheel of heavy goods vehicles – a catastrophic combination.

Our business is predominantly Designing, Manufacturing and supplying electronic systems into the automotive industry, with the main focus on heavy haulage. It is this background and experience which has equipped us with the research and capability to develop the product which we will now refer to as the ‘Red Box Truck Bro’ System. 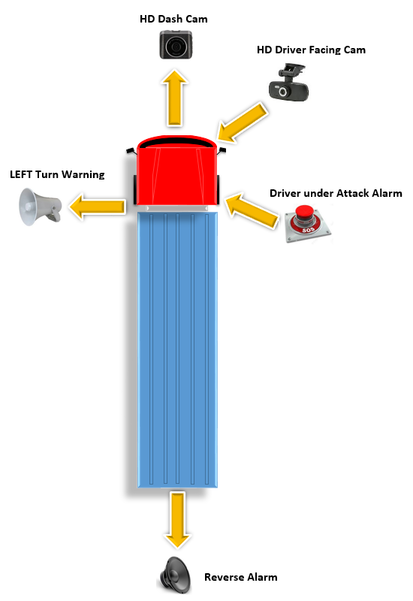 The ‘Red Box Truck Bro’ is a dedicated dash and in-cab driver camera system, which utilises two discrete HD Cameras. One Camera is wide angle and intended to be mounted as a normal forward facing dash camera to capture the road ahead, and the second ‘in cab’ camera is provided to be mounted so that it can visually monitor and record the drivers’ actions. There are four different camera options available, which allow for different mounting applications, including under or behind a rear view mirror. Video footage from both cameras is recorded onto industrial quality, solid state memory mounted inside the main tamper proof control unit, and any ‘event incidents’ such as an accident impact are securely retained, and ‘locked’, which means that incident footage cannot then be deleted or recorded over, until it has been accessed and viewed.

Unlike many cheaper, aftermarket systems which record poor quality and often grainy video footage, the “Red Box Truck Bro” uses HD cameras to produce high quality video footage from each Camera, which can then be viewed together or individually. All captured video and  protected incident footage can be viewed and downloaded via a password protected WiFi connection between the system control unit and any Android or iOS mobile device, and ensures that it can only viewed / deleted by Authorised personnel.

In order to maintain the privacy of “Trampers” who spend their rest breaks and nights out in the vehicle in-between their normal driving hours, the ‘Red Box Truck Bro’ only activates and records when the ignition is switched on.

There is, of course, the fact that fitting a driver facing, in-cab camera is largely done to deter voluntary driver distractions such as mobile phone use. Some haulage companies may also employ agency drivers to drive their vehicles on an ‘as required’ basis, this means that there are occasions where a driver may be driving a vehicle which is not familiar to them and even after signing a disclaimer some drivers may still be tempted to use a mobile phone once they are on the road, simply on the basis that they may believe that there is no chance of anybody discovering the fact. If you don’t make a driver aware that a Camera is fitted in the cab, then the whole deterrent factor of having a driver facing camera fitted is immediately lost, and the risk of distracted driving increases. However, whether you employ  agency drivers or full time employees to drive your vehicles, a driver is far more likely to engage in risk taking distractions, which put both your vehicle and other road users at risk, once the fact that they are being recorded by an in-cab camera has been forgotten. 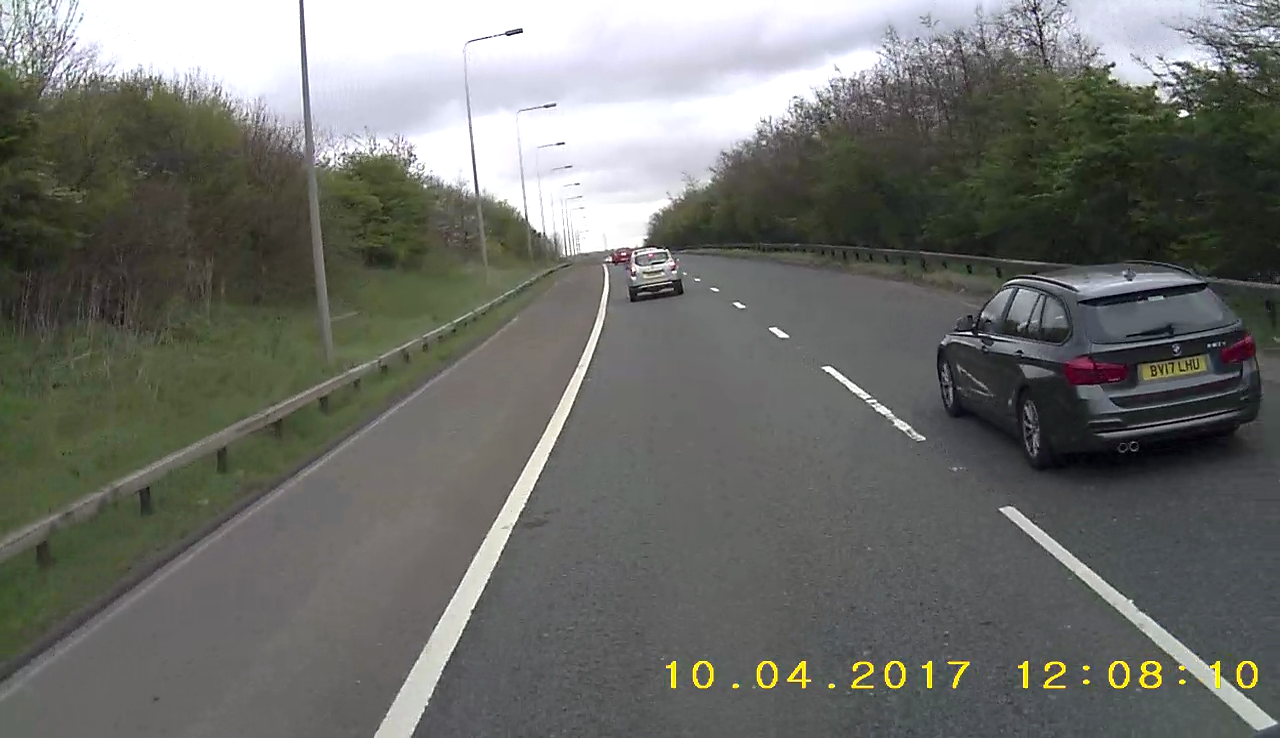 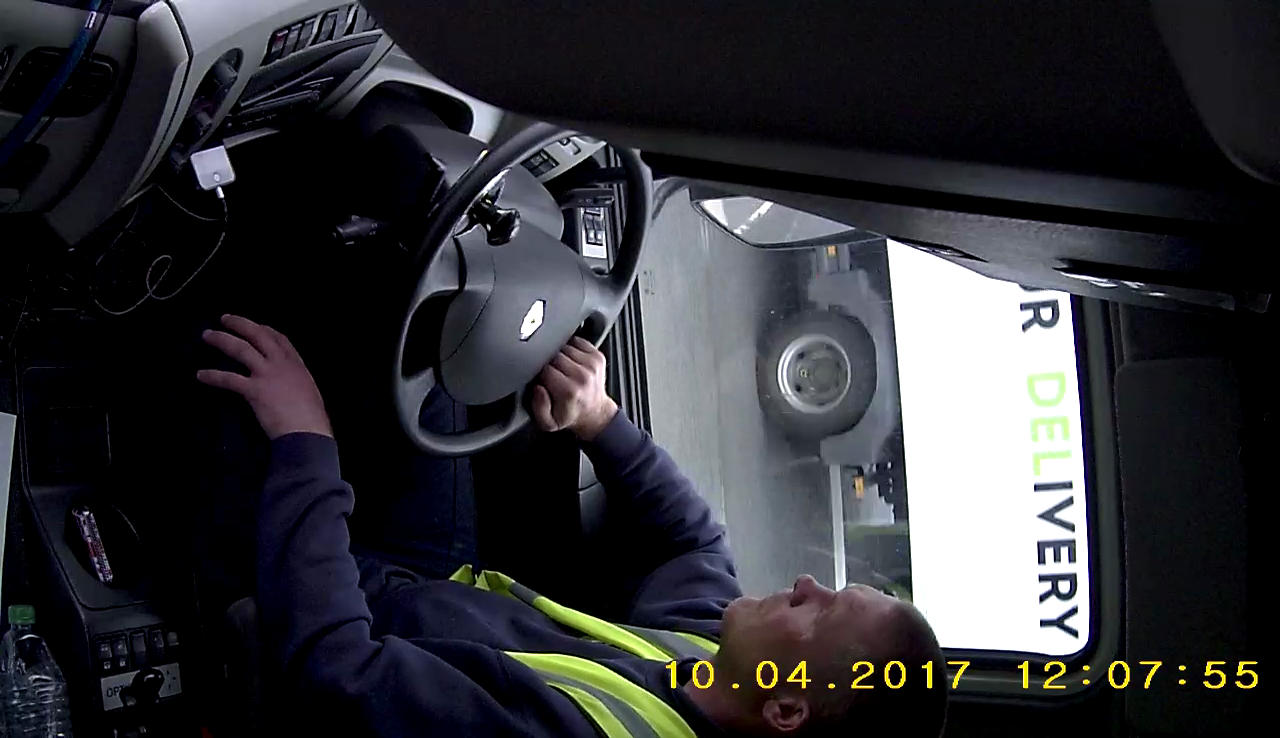 Whilst the ‘Red Box Truck Bro’  system will not stop an accident from occurring, its main focus is on being a deterrent, which protects both the vehicle and other road users from the effects of distracted driving, and the risk of insurance premium increases being levied on hauliers through the six penalty points now given to Drivers for the offence, not to mention the cost of having a vehicle off the road whilst repairs are made or accident investigations carried out. The system fully maximises this role by playing a recorded message, which verbally warns against Mobile Phone use whilst driving, every time the vehicle engine is started, thus making the driver aware (or reminded) of the existence of the camera and its purpose every time the vehicle is driven.

Built in self-diagnostics also check the system at each start up, which, in the event of a camera or system failure or instance of tampering, a warning message will be played to draw attention to the fact that the system is no longer recording each time the system attempts to initialise. With an increasing number of insurance companies now stipulating the fitment of in-cab driver camera systems, we believe that making the operators aware of a system fault as soon as it occurs will prevent any company unknowingly using the vehicle outside of any related terms of their insurance policy.

In addition to its function of being a stand alone dash and in-cab recording system, the “Red Box Truck Bro” is also available with optional “Left Turn” warnings for cyclists, reverse warning messages and a panic button activated Driver Under Attack alert – simply by fitting a second external speaker unit. This negates the need to buy and fit additional dedicated products for these applications, saving installation time and money.

A sample of the warning messages contained within the Red Box system are below.

The “Red Box Truck Bro” Features at a glance

***SORRY THIS PRODUCT IS NO LONGER AVAILABLE***